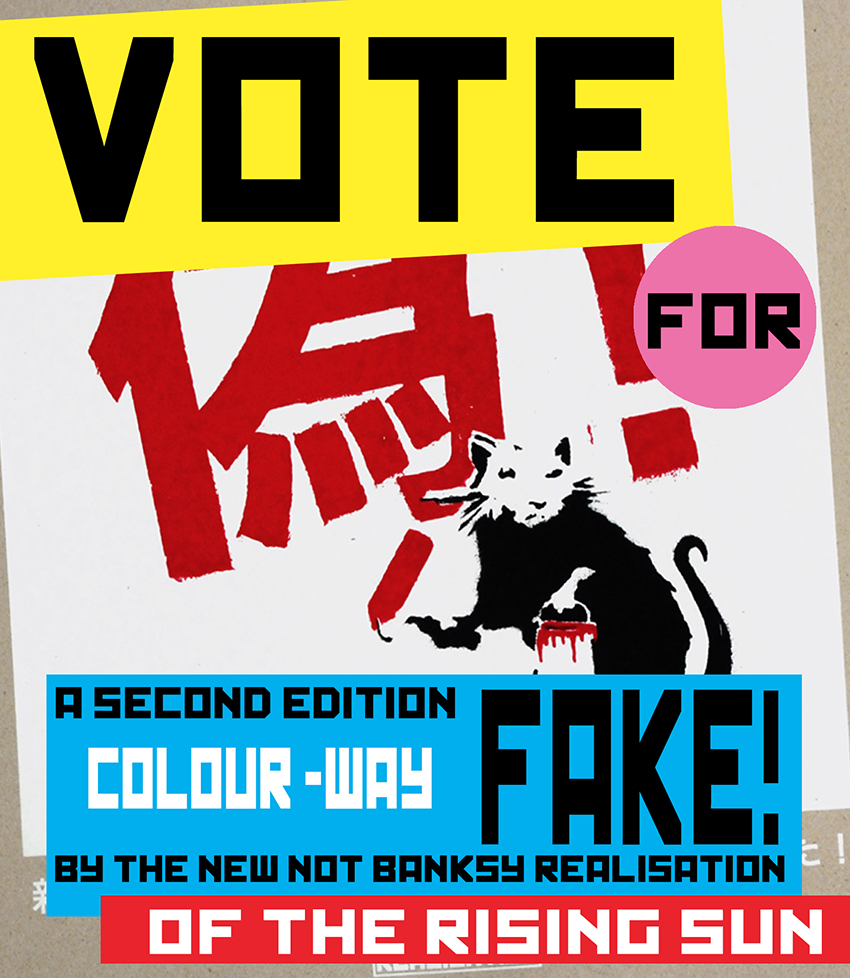 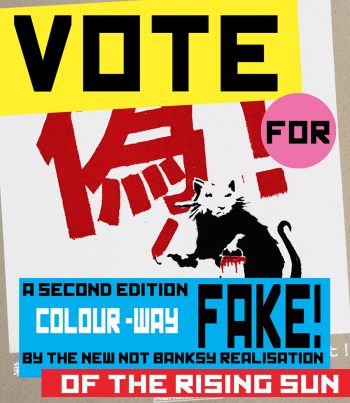 Colour-Way VOTE for the 2nd FAKE! Edition by the New NOT BANKSY Realisation of the Rising Sun

Despite all attempts by Donald Trump to thwart due process in the Democratic Arts, democracy is still alive and kicking at L-13

VOTE HERE to decide the colour-way for the Second FAKE! Edition and guarantee yourself a print when they are published.

Last year the First FAKE! Edition sold out in just 31 minutes. Then on 5th January 13 Prototype FAKE! Prints were sold in Japan by Gallery DNA in just under 13 seconds.

One of those prototypes will become the colour-way for the forthcoming Second FAKE! Edition.

You are permitted 3 VOTES ONLY.

If you vote more than 3 times your votes will be cancelled, you will lose and you will be reported to Donald Trump for VOTER FRAUD.

WHAT’S IN IT FOR ME?
If you vote for the winning colour-way you will be guaranteed the opportunity to buy a copy of the Second FAKE! Edition. Those who vote for a losing colour-way will have to fight for what is left when the prints go on open sale.

To cast your vote(s), click on the dropdown menu below to select your choice(s), then follow through to checkout. You will not be charged anything, and by voting your are NOT under any obligation to buy anything at any time.

THERE WILL BE NO CONTESTING THE VOTE AND NO RECOUNT. ALL LOSERS WILL CONCEDE GRACEFULLY

All those who voted for the correct colour-way will be contacted shortly with the offer to buy a print in advance off it going on open sale.

ABOUT THE NEW NOT BANKSY REALISATION of the RISING SUN

With the publication of a second NOT BANKSY screen print edition to be made, this normally inactive and secretive non-collective have made the following explanatory statement about their activities.

Q: Is the New NOT BANKSY Realisation of the Rising Sun really Banksy?

A: NO!  It’s STOT21stCplansC,D&E taking liberties and following the crazed narrative of the NOT BANKSY story to bring you disruptive joy in a time of confusion and anxiety.