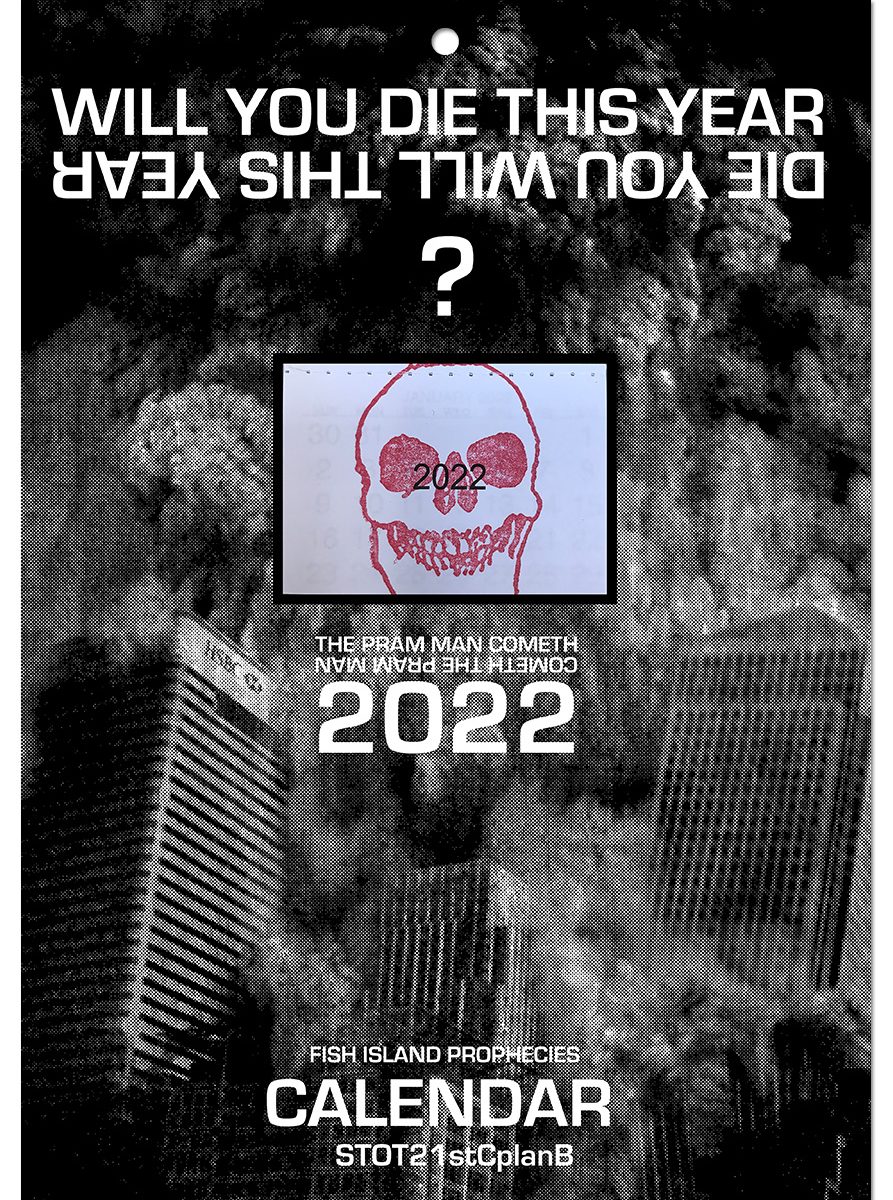 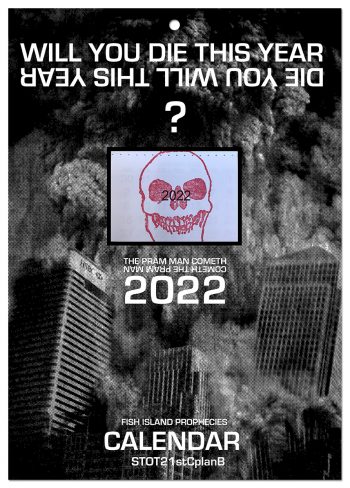 The World Famous Harry Adams Will You Die This Year? Calendar 2022

Designed and published under licence by STOT21stCplanB

So, another year is gone and you are closer to death than ever.

On the plus side, if you’re reading this it means you have so far survived plague, famine, war, climate disaster, murderous humans, killer animals, freak accidents, lethal illness, old age and all other acts of god & man that could have ended it all for you.

To celebrate this fact – the miracle of ongoing life and suffering – we publish this year’s calendar to keep you on your toes and aware that every second of your poor sorry life counts.

This year STOT21stCplanB have taken the helm, steering the design and concept to serve their own ends in showing off their almost God-like ability to create bleak visions, but more importantly as a vehicle to promote their forthcoming art exhibition: The Fish Island Prophecies (a retrospective).

Whilst the front sports one of their most cherished disaster images foretelling a cataclysmic end to the folly of high-rise death towers, with a handy no-nonsense calendar that contains potential dates for your demise blocked out in black, the back provides essential information about their next exhibition at Blasé House on Fish Island early next year.

So, two birds killed with one stone, and plenty more to be plucked mercilessly from the sky.

DISCLAIMER
This calendar is not predictive and has no magical properties. It is not recommended for those with overt superstitious beliefs, excess fear, existential dread, and/or no sense of humour about their own mortality.

If you die in 2022 we cannot accept any liability.

WARNING
Memento Mori: You only live once!

Edition of 113 copies numbered on reverse.
Contains suggested dates for your end blocked out in BLACK

THE FISH ISLAND PROPHECIES (a retrospective)

A re-imagining and forensic investigation into 21 years of creative misadventure by London’s least known and most unadmired art mavericks.

The original Fish Island Prophecies were foretold by The Pram Man in the late 1980s. The Pram Man was a reclusive artist and lifelong resident of Fish Island in Hackney Wick long before the area became trendy and other artists moved there, paving the way for gentrification.

Being secretive, and of a nervous disposition, The Pram Man kept his prophecies to himself, saying the world wasn’t ready for them yet. He wrote them all down in an illustrated manuscript that he sealed in a disused chest freezer that he then dumped in the canal where it sank into the black stinking silt. He proclaimed that if the freezer were ever found it could only be opened in the presence of the 13 foremost artists of the time, otherwise a terrible fate would befall the world.

In the year 2000 the Neo-Nothingist Anartist duo STOT21stCplanB found the chest freezer during one of their regular canal dredging trips. But, unable to decide who the 13 foremost artists of the time were, have kept the freezer firmly locked and hidden away in a secret location.

As such, their work foretold of a future of Fake News Fake Love and Fake Art that would lead the world to multiple crises of great calamity.

STOT21stCplanB were originally a zero-ambition noise/alt country rock band, releasing the nihilistic CDR only LP Satan’s Rat Trap and the Mouse that Wound Up Dead (2004) and the flood/love disaster inspired mini-LP Up To Yer Neck In It (2005), before moving their attentions towards visual art disruption. Three years of intense creativity followed where the duo worked in a multiplicity of mediums from photo-montage, printmaking, painting, political campaigning, crockery and making fake Banksy’s under the name of Not Banksy. In 2008 when their gallery the L-13 Light Industrial Workshop hosted a fund-raising event for Ken Livingstone’s mayoral campaign, STOT21stCplanB declared that they would stand against him and put forward their own candidate known only as THE ASSISTANT. Despite designing some fantastic campaign posters they failed to get to even the first stage of the elections and with bitter disappointment they declared their semi-retirement at the end of 2008. They then spent the next 13 years mostly painting landscapes under the name of Harry Adams, re- emerging occasionally for one-off projects and then (due to popular demand) re-activating the Not Banksy project in 2018. Since then, making Not Banksy’s has kept them very busy and made them lots of money. They’ve spent some of that money on publishing a memoir of their Not Banksy experience and the rest will be spent on making artworks that reimagine and remake some of their previous efforts, but done better this time.