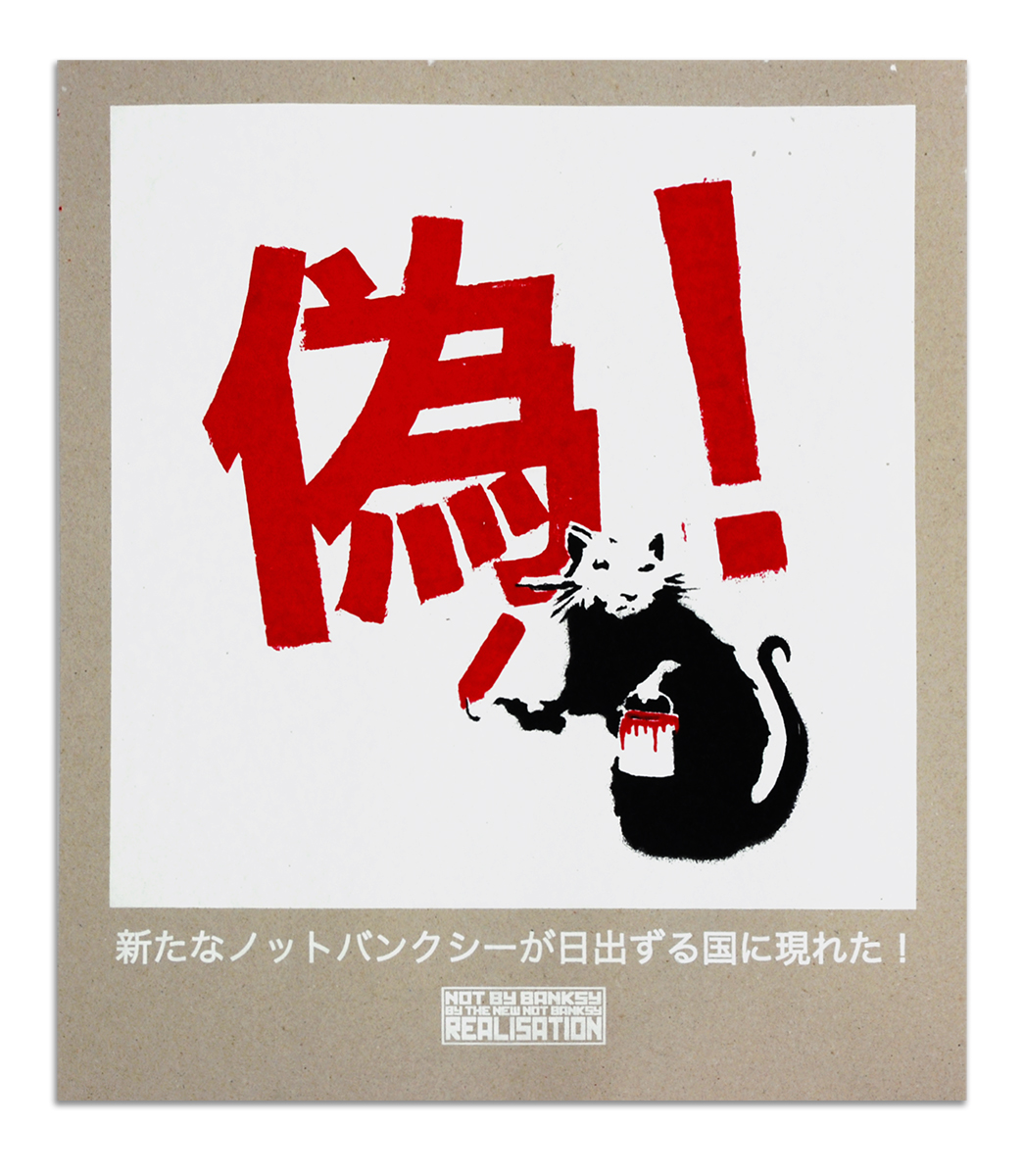 FAKE!
There seems to be a New Not Banksy Realisation in the Land of the Rising Sun

THE DIVINE WIND OF THE NEW BANKSY REALISATION IS BLOWING

A mysterious package was left in the eaves of the Liberty lifestyle store in Miyazaki, Japan.

This package contained 250 screen prints by the New Not Banksy Realisation and we have been sent 200 of them to sell to “The West”.

Limited Edition of 250 prints
on 1200 micron recycled grey pulp card
Signed with the STOT21stCplansC,D&E Thunderbolt Man
Numbered and stamped on the back with a COA label attached.

DON’T BE GREEDY. DON’T PANIC BUY. NO STOCKPILING.
ONLY ONE PRINT PER HOUSEHOLD PERMITTED.

DELIVERY SCHEDULE
THESE PRINTS ARE MADE AND READY TO DISPATCH. THE LAST DAY OF POST WILL BE 17th DECEMBER 2020

WARNING
THESE PRINTS ARE PRINTED BY UNSKILLED WORKERS AT THE L-13 LIGHT INDUSTRIAL WORKSHOP ON PULP CARD THAT VARIES IN SHADES OF GREY. ALL INK MARKS, MISPRINTING, BUMPS AND ABRASIONS ARE PART OF THE WORK. WE MAKE NO APOLOGY FOR THIS. THEY ARE ALL BEAUTIFUL AS THEY COME.

ABOUT THE NEW NOT BANKSY REALISATION

This is the new true story of the New NOT BANKSY Realisation.

With the publication of a NOT BANKSY screen print edition to be made and sold in Japan for the Japanese people, this normally inactive and secretive non-collective have made the following explanatory statement about their activities.

This statement was found with a pile of 250 prints on the doorstep of the Liberty lifestyle shop and cafe in Miyazaki, with additional instructions to sell the first 50 copies in Japan and export the remaining 200 to be sold to ‘the West’ through their longstanding co-conspirators, the L-13 Light Industrial Workshop.

NOT BY BANKSY BY THE NEW NOT BANKSY REALISATION

FAQ’s about the New NOT BANKSY Realisation

Q: Is the New NOT BANKSY Realisation really Banksy?

A: NO!  It’s STOT21stCplanB taking liberties and following the crazed narrative of the NOT BANKSY story to bring you disruptive joy in a time of confusion and anxiety.